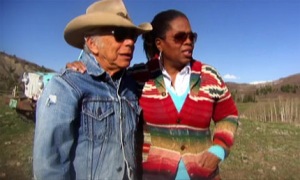 I really do like Oprah, and I appreciate soft, feature news as much as anyone. But I found Oprah’s interview aired today with Ralph Lauren on his RRL Ranch outside of Telluride, CO, to be a bit corny.

The ranch landscape is incredibly gorgeous, but how many ranch owners can afford miles and miles of peeled log teak fence?

Lauren has several large hand-painted teepees on his ranch, which are also amazingly beautiful and create an incredible scene against the sharp mountain backdrop. But inside these teepees are fully furnished and better decorated than my home, so how authentic can they really be? The Indians certainly didn’t live like that when they lived in teepees, and, sadly, even today many on the reservations still don’t live in anything nearly that nice.

I also found it odd that Oprah was so awe struck over a working cattle ranch. Oprah has spoken out against beef consumption on more than one occasion during the past 25 seasons of her television show.

And here’s the most absurd part of the actual interview. Oprah’s hardest hitting question to Ralph Lauren was, “Where did the idea for the polo shirt come from?”

Lauren didn’t really answer it other than to say that the polo shirt is a representation of the brand.

Hilarious! Yet I’ll bet this Oprah episode, being one of her last on network television, had more viewers than any hard news program of the day. That’s both odd and sad.

Be Notified of Posts